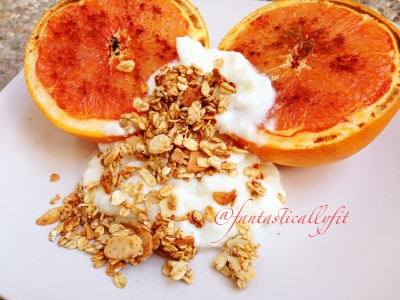 If you've never broiled a grapefruit before you are missing out! Makes it extra flavorful and cuts the bitterness out!

Sprinkle halved grapefruit with cinnamon. Cut around the outside of the grapefruit. Place grapefruit on a pan and place in the oven. Turn the oven to broil and let it cook for approximately 8 minutes until crispy.
(Keep an eye on it because it goes from crispy to burned very quickly). Remove from oven and top with granola and greek yogurt!

U More Recipes By @fantasticallyfit:

What the Fudge? High-Protein