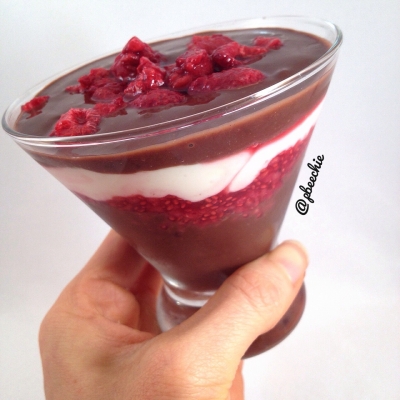 The secret's in the pudding ;) aka hidden protein! Woo!

First make the rich chocolate pudding. Put the chocolate pudding mix, 1 tsp instant espresso powder, and 1 stevia packet in a saucepan. Then slowly add the almond milk. Heat the pan over a medium heat until the pudding thickens. Turn off the heat. Whip the egg whites until stiff peaks form. Fold into the pudding mixture. Once cool, stir in 1/2 cup plain greek yogurt. Store in the fridge until you want to eat it.

Make the raspberry chia jam by microwaving the raspberries for 1-1.5 minutes until melted. You want to keep the juice that comes off! Add 2.5 TBSP chia seeds and 2 stevia packets and mash a bit. Place this mixture in the fridge for at least 2 hours to let the chia seeds plump up before eating it.

Assemble 4 parfaits by layering each component. Top with more raspberries if desired!

U More Recipes By @pbeechie: