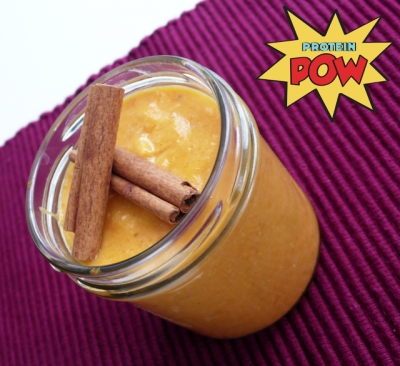 The pudding took me literally a minute to make and oh nom nom nom! It was, on the whole, an awesome two-course post-workout meal which I proceeded to devour with so much gusto that I almost levitated :-D

Throw vanilla whey and roasted butternut squash together, blend them together and presto: you've got yourself a protein pudding.

You can add some hot milk + gelatine to turn it more into a custard too but I wanted to eat it right then and there so I did it this way and then topped it with some cinnamon sticks. The cinnamon sticks are obviously optional; I just put there there for aesthetics (and to dip the sticks in the pudding before licking them because I'm a cinnamon fiend and cinnamon sticks are amazing).

Note: Consider adding a tbsp or orange-flavoured fish oils to the mix. I know it sounds odd but, trust me, it works! I would have added some to this one but I was out :-(

U More Recipes By @proteinpow: