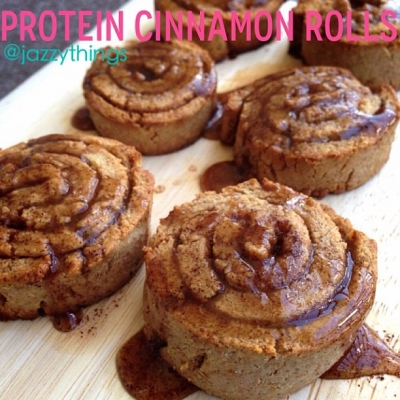 Yes. I saw a few cinnamon roll posts floating around so I set out to make a jazzy protein creation of some!

Whisk together 3 eggs, 1/4c melted coconut oil, 1t vanilla extract and 1/2c honey. Add 2c whole wheat flour, 1t baking soda, 1t cinnamon, and 2 scoops of cinnamon bun (Dymatize brand) casein protein (use any flavor you want, and yes, you can use whey as well). This dough will be very stiff, but stir stir stir/knead knead knead. Roll the dough (with a rolling pin [actually I used a can because I don't have a rolling pin ha]) between two pieces of wax paper until it is about 1/4 thin (no thicker - it'll be crumbly so if it is too thick, it won't roll). I then cut the dough to make a rectangle so it didn't have jagged edges.

For the filling, mix together 1T melted coconut oil with 3T honey, 1t vanilla extract, and 1t cinnamon. Pour on top of your dough. Slowly and carefully roll the dough into a "log" (again, it'll be fairly crumbly, but if it is thin enough it will roll). Cut pieces off of the roll (about 1 inch sections) and place on a baking sheet. Bake at 350 for 12 minutes or until golden. The glaze is the same mixture as the filling. I was going to make a frosting but ended up with a glaze. The frosting I used on my bundt cake would be awesome on these ðŸ‘Œ. Enjoy

U More Recipes By @jazzythings: